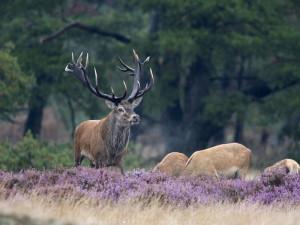 Alpine red deer is our biggest deer, with a shoulder height of 1.5 meter. It generally has lithe, compact bodies and long, powerful legs suited for rugged woodland terrain. It has a long head with big pointed ears. Their fur is long and brittle, red-brown in summer and grey-brown in winter. Their tail is around 15 cm long. Males have longer hair at the back of their neck (a mane) and a white rump. Fawns have spots which may, especially on the back, remain visible throughout their life. All male deer have antlers, whereas the females do not.
Young male deer start growing antlers at 12-14 months, which are unbranched at first. They lose their first set of antlers in April when a new stronger and branched set starts growing. They reach their full size in 10 years and consist of 2 branches, each of which has up to 7 spikes, which together form a crown. Branches can grow up to 120 cm and are more or less symmetrical. Antlers grow as highly vascular spongy tissue covered in a skin called velvet. Before the beginning of a species’ mating season, the antlers calcify under the velvet and become hard bone. The velvet is then rubbed off leaving dead bone which forms the hard antlers. After the mating season, the pedicle and the antler base are separated by a layer of softer tissue, and the antler falls off. Males weigh up to 250 kg whereas females weigh around 150 kg.

Hunting and the level of difficulty
One can go deer hunting in two ways, be it by stalking or from a lookout. Hunting itself is most exciting during the rut, between September 15 and October 10. Going deer hunting, there is always an option of staying in one of the hunting cabins at the centre of the hunting grounds, which is itself also densely populated with chamois, which share their habitat with deer.