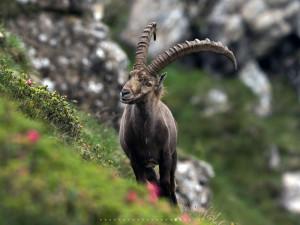 Alpine Ibex is a strong, thickset and shapely animal. The heavy body (1.5 m in length) is supported by short, study legs. They have a short tail and a white rump. In summer, the coat is grey with dashes of red which turns yellowy grey in winter. Both male and female Alpine Ibex have large, backwards-curving, horns with numerous ridges along their length. Horns on bucks grow up to 100 cm long, and have small bumps on the outer curve. The much thinner, shorter horns of females are smooth, and grow up to 35 cm. Males weigh from 67 to 117 kilograms, whereas females weight from 17 to 32 kilograms. Alpine Ibex live in groups, but the old males roam solitarily. They rest throughout the day and search for food in the evening. They subsist on a diet of grasses, hay, woody plants, and leaves. Alpine Ibex are known to be excellent climbers and do not fear steep slopes; they can jump as high as 4 metres. The males and females breed in the late fall, from the end of December until January. After 20-22 weeks of gestation period the female gives birth to 1-2, sometimes even 3 kids. In the wild, if they can avoid predators, Alpine Ibex have lifespan of 17-19 years. Their predators include bears, wolves, foxes, golden eagles, and humans, but are not threatened by any predator in Slovenia.

Alpine Ibex typically inhabit open, rocky habitats at high altitude, above the tree line at an altitude of 1600-3200 m. They migrate seasonally to different altitudes, spending the harsher winter months at medium elevations.

Hunting and the level of difficulty
Alpine Ibex hunting requires physical stamina. Hunting is through stalking, as they are very unpredictable and their movement depends on the weather changes. It is most advisory to go hunting in August and December. However, hunting in December is much less demanding, as the Ibex descend to the tree line. Large snowfalls do not disturb hunting, as the guides are familiar with the slopes where Ibex spend winter months.