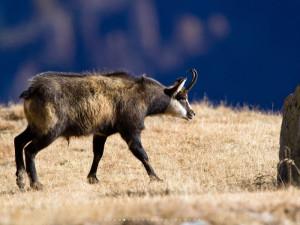 Chamois is a smaller bovid 75 cm high at the shoulders. In summer, the fur has a rich brown colour which turns light grey in winter. Winter fur is much thicker, therefore chamois appear robust and stout in winter and slender in summer. Distinct characteristics are a white face with pronounced black stripes below the eyes (called reins), a white rump and a black stripe along the back. Both males and females have short, black, straightish horns which are hooked backwards near the tip. Males, which are one tenth bigger than females, have stronger and more hooked horns, which start growing at birth and are  basically a highly vascular spongy tissue covered in a skin called velvet. Older chamois have horns covered in resin, probably as a result of rubbing against spruce and larch bark or dwarf pine. A fully grown chamois weighs between 20 and 30 kilograms.

Hunting and the level of difficulty
The ideal time for chamois game is August, while the animal still has its summer fur, although some hunters claim real chamois hunting should be done in winter. Simultaneously with chamois hunting you can also go hunt roebuck and vice versa.  Another ideal time is during the rut in November, although it is physically more demanding. The stronger males protect their packs of mated females and engage in fierce battles for the attention of unmated ones. The level of difficulty is a bit higher in the Triglav National Park, due to higher mountains and more difficult terrain, but the selection of hunting trophies is much wider. When hunting chamois you are left with some afternoon time to go fly-fishing or for a trip around Slovenia.