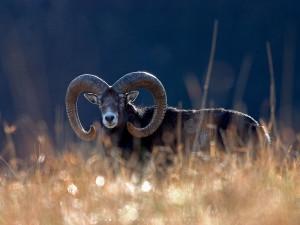 Mouflon are thickset and strongly built with strong legs, which make them good runners. The males have horns curved in almost one full revolution (up to 1 m). Some females are horned while others lack horns. Males are a bit bigger than females. Their habitat are steep, sunny, mountainous slopes near the tree line, whereas they tend to avoid moist and soft grounds since they cause their hooves to wear. Accustomed to warm climates, they tend to pick

Mouflon hunting is among the most demanding ones since they are very shy and live in herds led by cautious experienced females. Suitable time to go mouflon hunting is before the first snow, when forest grounds are soft and soggy, which enables us to approach them easily. It is most advisory to go hunting from November till February, when mouflon are hunted from higher lookouts. In winter mouflon is mostly active at dusk and at dawn, therefore it is recommended to combine mouflon and chamois hunting.