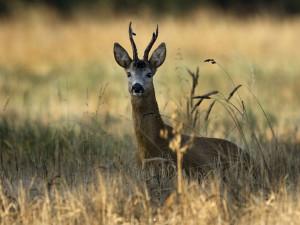 The Roe Deer is a relatively small deer, with a shoulder height of 63–67 cm and a weight of around 25kg.  It has rather short, erect antlers and a reddish body with a grey face. Its firm hide is golden-red in summer, darkening to brown in winter, with lighter undersides and a white rump patch; the tail is very short and barely visible. The fawns are sand brown with white spots, which start becoming less visible at the age of 6 weeks and completely disappear after the hide change in October. Males have short rough antlers on their forehead. The first and second set of antlers are unbranched and short while older bucks in good conditions develop antlers with two or three, rarely even four, points.
Fawns grow their first set of antlers in November or December and lose it in February. The adult roebucks get their set of antlers in December, which fully develop by the end of March or April. They lose it again in September or November. Older females can exceptionally grow a set of smaller antlers.

Hunting and the level of difficulty
Roebuck hunting is usually done early in the morning or in the evening, so it only takes 6-8 hours. The rest of the day can be spent fly-fishing or going on a trip. Roebuck hunting is physically not demanding, although there can sometimes be some weather related trouble. However, rainfall is always welcome, since deer tend to come out before and after the rain.